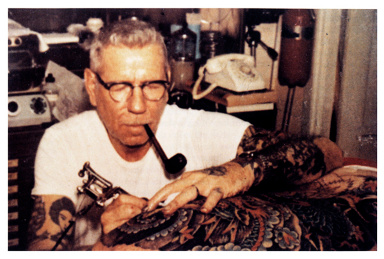 Have you ever heard about Norman Collins aka „ Sailor Jerry“ ?

He’s the Icon of the old school tattooing.
As a child he hopped freight trains across the country and learned tattooing from a man named “Big Mike” from Palmer, Alaska, originally using the hand-pricking method. In the late 1920s he met Tatts Thomas from Chicago who taught him how to use a tattoo machine. He practiced on drunks brought in from Skid Row.[ He later sailed the Pacific Ocean before settling in Hawaii in the 1930s.
At age 19, Collins enlisted in the United States Navy. During his subsequent travels at sea, he was exposed to the art and imagery of Southeast Asia.

And now we are glad to invite you to the “Sailor Jerry Pop-Up Store”, right here in Berlin Friedrichshain. What means that it’s pop –up? It’s temporary, from the 11th to the 14th of August.
What can you expect there?
– Walk in Tattoo, in the style of Sailor Jerry , without appointment, from The “Black Cat Tattoo Berlin” guys
– Having a new cool haircut from Barber “Steven Ward” from Manchester, UK
– Sailor Jerry Clothing collection 2015
– Sailor Jerry Art & Flesh exhibition
– Amazing Sailor Jerry Cocktails & Long Drinks
– Musik and movies

And here some more about Sailor Jerry: http://sailorjerry.com/en/